The words "root canal" are often misconstrued as a tortuous experience, but in reality can relieve you of intense pain. I often find that most patients welcome the relief that comes from having the procedure performed.

Why a root canal? In many cases it is usually due to very deep decay that has infected the inner part of your tooth called the pulp. Your body is unable to fight off the infection and the pulp "dies". Being a closed system a buildup of pressure and collection of debris occurs thus resulting in pain and sometimes swelling. In other instances a root canal is necessary because the pulp has "died" because of external trauma to the tooth.

The root canal procedure involves the removal of the diseased tissue and replacement with an inert material which acts as a "cork" or "stopper" to prevent the ingress of fluids into the canal proper. Once properly sealed a tooth with a root canal can function normally for many years.

The process usually involves one to two appointments, depending on your particular situation. In some cases an initial emergency visit will remove most of the diseased tissue, but not all, in an effort to immediately resolve any acute pain and swelling. Antibiotics may or may not be prescribed dependent on your particular case.

If your tooth had a great deal of decay or was fractured a crown will be placed on the tooth to restore and protect it.

Root canals area great way to save teeth and will ensure that tooth loss will not become a problem for you or your family.

• Below is an example of a failing root canal that has been redone. Note the dark changes that were originally present between the two roots (first picture). In the second photo taken 6 months later you can see that new bone is being deposited between the roots. 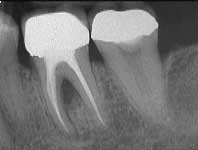 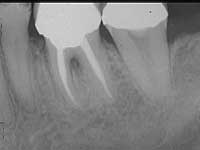 If the root canal had not been redone the only recourse would have been to have the tooth removed. Now the patient has a viable tooth that will serve her well for many years to come.